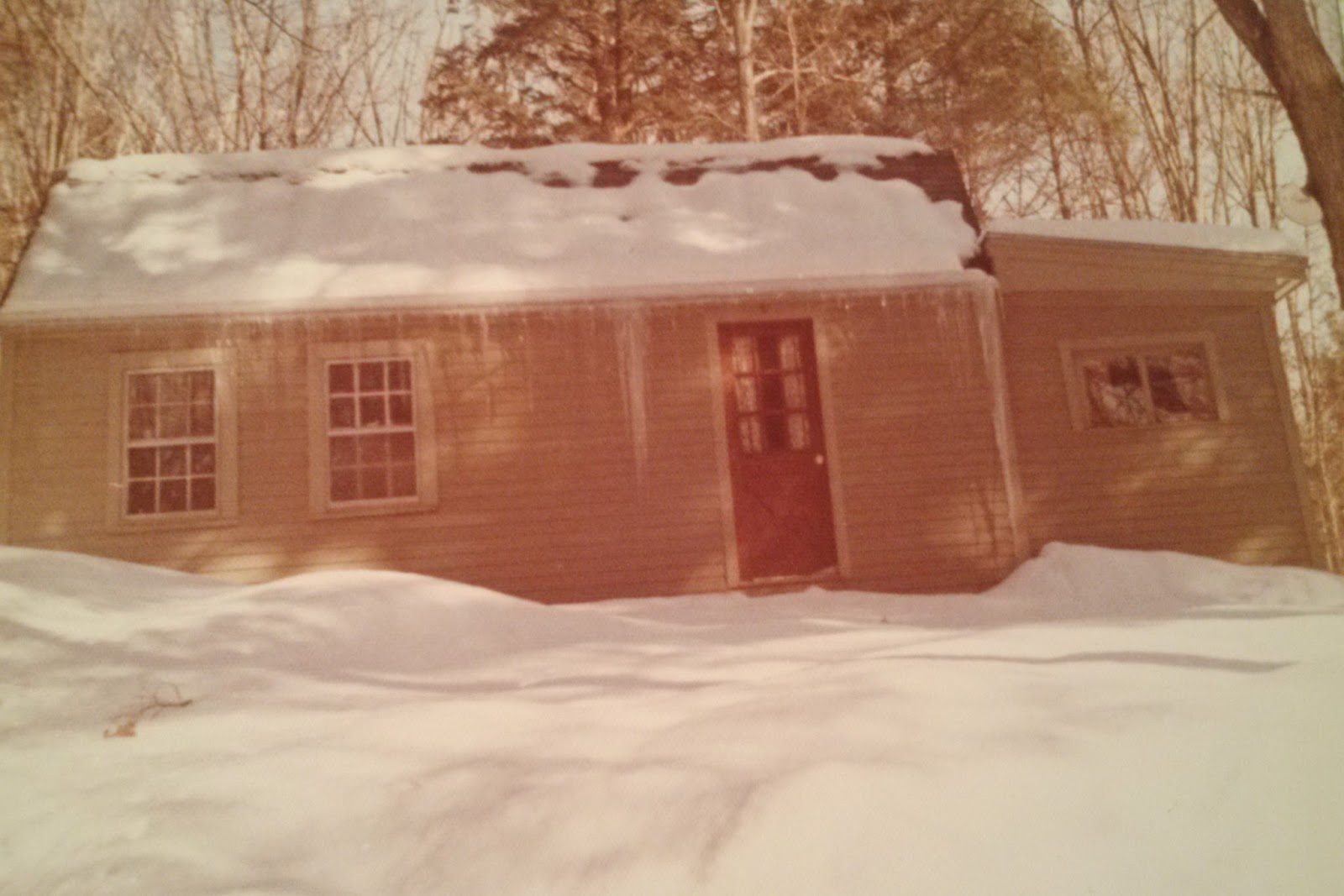 Welcome back to Tell a Memory Tuesday! Last week I wrote about our wedding. This week I’m skipping forward to the Fall of 1975, which finds us living in one side of a rental duplex in New Hampshire. Steve had accepted a job as teacher in a Christian school.

[bctt tweet=”Experiencing the changing seasons in a northern climate was quite a novelty for this Florida girl.” username=”GaylWright”]

We Buy Our First House

After a few months of searching, we purchased our first house. It was a small one on 3/4 acre in Amherst, a picturesque New England town complete with village green and white church. The house was perched on a hill, just up the road from the town center. I loved our little home.

The property bordered on a stream that divided our land from the next door neighbor. We found out later that our tiny house began as one room, and later other rooms were added as they were needed. In fact, one of the rooms still had the small red cedar shingles along a wall that had originally been the outside wall.

[bctt tweet=”We counted about 76 white birch trees among many other trees on our small patch of land.  ” username=”GaylWright”]

I remember being surprised by the burst of color during that first Autumn. As the leaves fell, there was a carpet of red, yellow, orange and brown on the ground. We lived there for three years.

We moved into our house in February of 1976. At that time I was about 5 months pregnant with our first child, but at least I was no longer having nausea.  Even though we moved during winter, we were blessed with good weather in the form of a warm spell. Most of the snow melted, making it much easier to move.

[bctt tweet=”The warmth was short lived, however, and the snow came back with a fury, thickly blanketing our long uphill driveway.” username=”GaylWright”]

One morning while eating breakfast, wondering how we could clear the way for Steve to go to work, we heard a noise outside. To our surprise, the former owner had come with his snow plow and cleared the driveway! He did it several more times that year. We were so thankful.

While I was pregnant, we acquired a puppy. Friends of ours found him wandering by the highway. They couldn’t keep him so they brought him to us. Because we didn’t know how old he was or where he came from, we named him Melchizedek. We called him Mel for short.

He was quite a character. I’ll share more about him later.

Babies Never Come on their Due Dates?

Our first child, Sara, was born in June of that same year. She was very punctual, as she came right on her due date, refuting what people told us about babies never coming on their due dates.

[bctt tweet=”One problem, though, is that my mom was in an airplane on her way to the Boston airport which was an hour away from us.” username=”GaylWright”]

We had to call our friends to pick her up, because Steve needed to be with me. They had never met my mother, and we had no way of letting her know. This was before cell phones. They left to meet her, armed only with a picture. Eventually they found her and made it to the hospital while I was still in labor.

Because this was my first child, the doctor went on to see patients at another hospital after he checked on me. But things were moving fast. We kept telling the nurse that she needed to check me, but she assured us that first babies always take a long time.

Finally, I guess she tired of Steve bugging her so she came to check and was surprised that it was time. Quickly, she called the doctor, and he barely got to the hospital before Sara made her debut. He came rushing in and said “Do I have time to change?”

The maternity ward was not very busy that day, so when my mother arrived they let her come into the labor room with us. Then they let her stand outside the delivery room to hear the first cry of her first grandchild. After taking me to my room, they let her come in so she could hold our beautiful daughter. Nowadays, that’s not a big deal, but then it was very uncommon to allow anyone besides the father.

I wish I had a picture of my mother with Sara, but I was not able to find any. Here is my dad with her when she was about two weeks old.

[bctt tweet=”We couldn’t leave our dog alone for long, because he was so mischievous. Every time we came home he had gathered all the little throw rugs and put them in a pile in the living room. ” username=”GaylWright”]

Sometimes he chewed on them, but that was usually the extent of the damage. 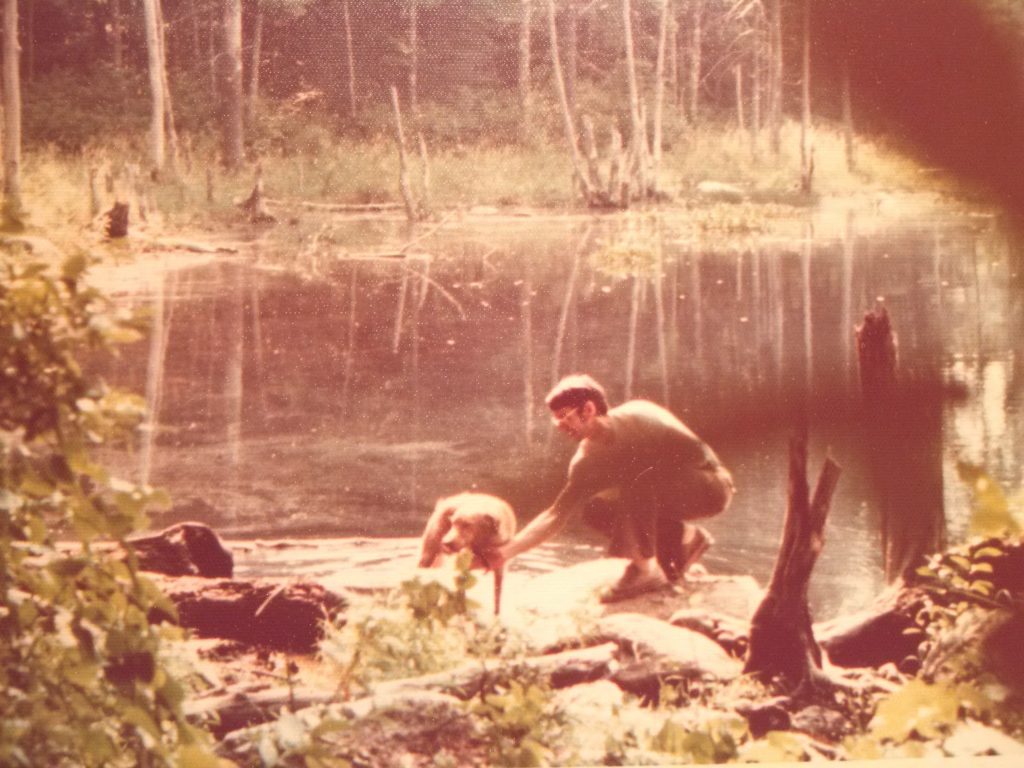 The day Sara was born was another story entirely. Our neighbor had offered to keep him for us, but things happened so fast we didn’t have time to alert her.  We thought he’d be fine.

Come back next Tuesday to find out just how much mischief one puppy could manage while we were at the hospital.

Now I’d love to hear your stories. Do you have memories of “firsts” in your life? It doesn’t have to be a house or a child or a puppy – it can be any memory that comes to mind.

I’m linking up with: #TellHisStory , #LMMLinkup