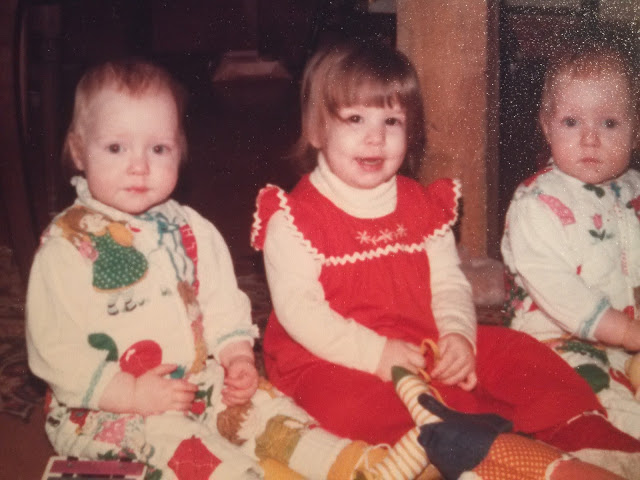 Last week, I told about our dog’s mischief along with winter and summer adventures. This fifth post in the Tell a Memory Tuesday series begins with Autumn of 1977. Steve began another year of teaching.

My friend, Sandy, asked me to take care of her twin girls two days a week. They were three months younger than Sara, so it would be almost like having triplets for those two days.

Sandy taught physical education at a local school. She and her husband, George, were the friends who picked up my mom at the airport on the day of Sara’s birth.

We had lots of fun times with them, one of which was to visit our favorite restaurant. Parker’s Maple Barn  is where I first tasted real maple syrup and blueberry pancakes made with whole wheat flour.

[bctt tweet=”The twins were three months younger than Sara, so during that time I got a taste of having triplets!” username=”GaylWright”]

Lunch time was interesting. With three high chairs lined up I gave them all bites of yogurt one right after the other. They also enjoyed some finger food, too.

Then when nap time came around, I changed their diapers one by one on the changing table.  Then I put them all to bed where I had lined up two portable cribs next to Sara’s full size crib.

Close your eyes for a minute and try to imagine what it was like.

Things went surprisingly well most of the time, although sometimes I think Sara was a little jealous.

[bctt tweet=”During that time, another child began to grow within me. With my first few weeks of queasiness it was really hard when all three babies had messy diapers.” username=”GaylWright”]

Some older ladies took an interest in me and helped in so many ways. This was such a blessing since my mother did not live near. I would sometimes invite one of them over for the day, and she willingly changed the diapers. Those loving friends were a special gift.

During the spring when the weather warmed up Sara and I took lots of walks in our little neighborhood.

[bctt tweet=”Our dog, Mel, would always run ahead of us, come back to check on us, then take off again.” username=”GaylWright”]

He would continue coming back to us to make sure we were fine. Then off he went.

On Easter Sunday, we took a walk when we got home from church. As we walked, Sara kept exclaiming what sounded to me like, “Peewow! Peewow!”

For the life of me I could not figure out what she was saying until we arrived back home.  She leaned over, picked up a flower and continued repeating those words. That’s when I realized she was exclaiming, “Pretty flower! Pretty flower!”

Sara still loves flowers and has all kinds of growing things at her place – Edgewild Community Farm. She is certified in Permaculture and has her own business – Liberated Landscapes, LLC, located in Gaffney, South Carolina. If you live in the upstate area of SC, please take a look at what she offers.

[bctt tweet=”How about you? Do my memories help to stir up some of yours? I’d love to hear about them!” username=”GaylWright”]

Next week for Tell a Memory Tuesday, we will take a step back to share some interesting details of our move to New Hampshire, before Sara’s birth. There was a harrowing drive through part of New York state, a visit to Mt Washington and more.