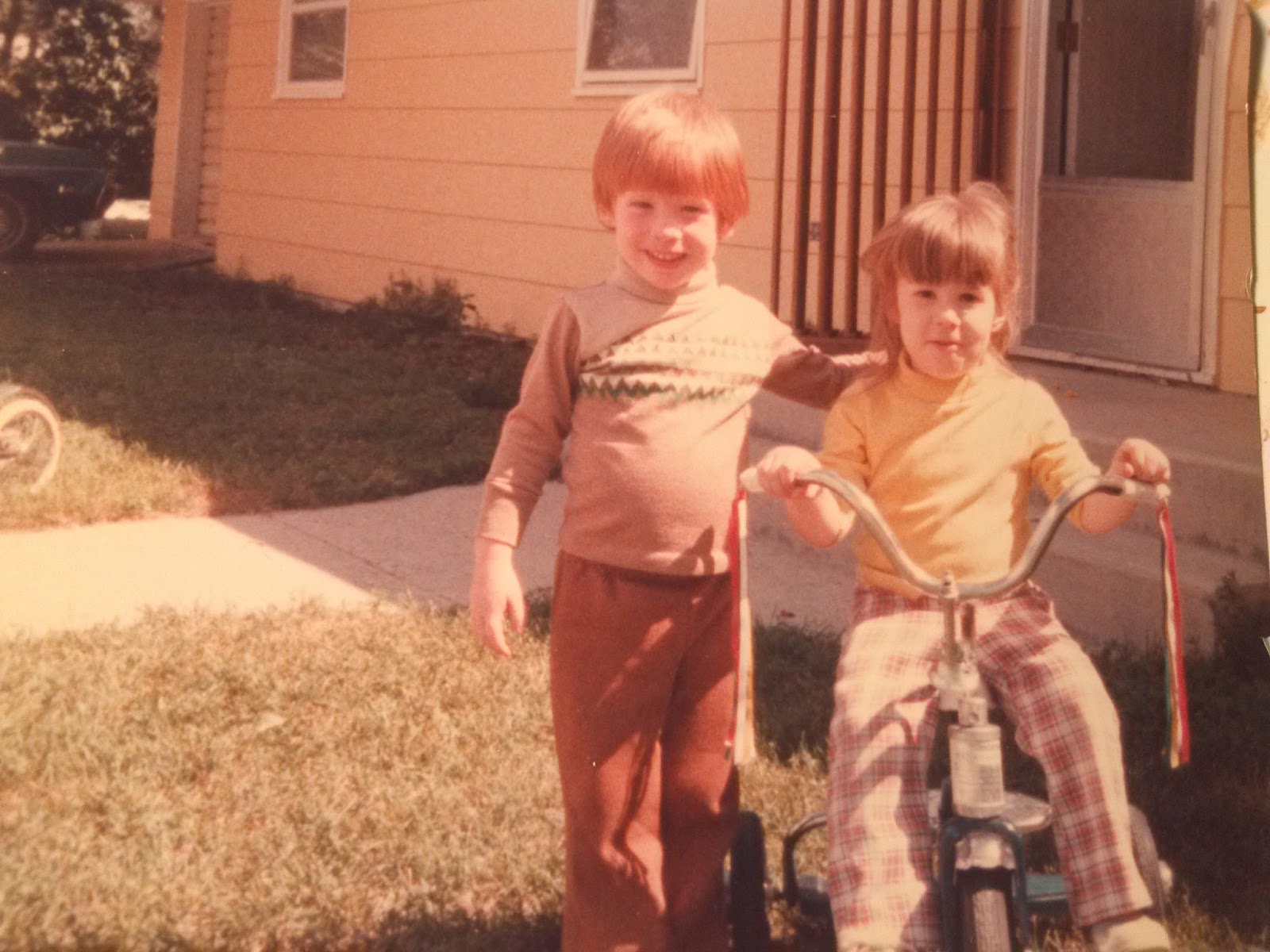 Welcome back to my Tell A Memory Tuesday series. Our life was full of changes and moves. At the end of the summer of 1979, we made a cross country move from Florida to South Dakota. Steve’s one year job at a private school had ended. He looked but could not find another teaching job there in Jacksonville that would support a family of four.

As I mentioned in last week’s post Steve accepted a job at a boarding school in South Dakota. His sister, Ruth, lived in SD about 3 hours away from where we would be living. Her husband, Gary, flew to Florida to help Steve drive the moving truck. My mother-in-law accompanied me and our two girls via airplane.

An interesting fact is that when we stopped in Colorado to change planes we were surprised to see Gary as we passed in the hall going in opposite directions!

Ruth picked us up at the airport in Rapid City, SD. The first night there was a heavy thunderstorm with lots of lightning and thunder. I was tired after the flight and caring for two little girls, one of which I was still breast-feeding.

Lying in bed in a new place, in the dark, with the thunder booming and lightning flashing, was a bit frightening. Eventually I fell asleep and must have felt much better by morning. We stayed there until Gary and Steve arrived with the furniture.

Arriving At Our New Home

We all drove to the duplex that was to be our home on the campus of Sunshine Bible Academy in Miller, South Dakota. I’m pretty sure it was early evening when we arrived, and we were all tired.

I remember my lower back was giving me a lot of trouble, so I was moving slowly. Walking around was hard, especially carrying a ten month old. The family that lived in the other part of the duplex, Glenn and Linda Letellier, were kind and helpful. They made us feel welcome and treated us as family.

We still had the baby grand piano we bought in New Hampshire. It was quite a feat to move it, and we had done it about six times already. And this would not be the last. There would be several more moves before it came to rest in our present home.

Only a wall  separated our living room from theirs, and that was where we put the piano. It’s a good thing they enjoyed music, because I’m sure they could hear loud and clear when I played.

Living in South Dakota was an adventure for me, because I had never been any farther west than Mississippi. The climate was dry with a wind that was almost constant, quite a change from the humidity we were used to in Florida.

There were not many trees, and the land was flat. Sometimes we could still see the setting sun through our picture window at 9:00 in the evening!

The following picture shows part of the window. Our dog loved to sit on top of his dog house, which was right outside that window.

Yes, this is the same dog that cause quite a lot of  destruction in our New Hampshire house as told in this story.

There was much to learn in this new-to-us place, including new life skills. We were given room and board, and along with that Steve had a small salary. They only provided bread for those who were working outside the home. The rest of us had to bake our own.

This was a new challenge for me, but it was fun. I branched out into making English muffins and other breads.

I even learned to make pizza. My neighbor, Susan Lee, gave us a recipe she got from a friend who worked at a pizza restaurant. After 40 years, we still use that recipe.

A trick Susan taught me was to use scissors to cut pizza. We still cut pizza that way, because it works better than a pizza cutter.

One day I was making cinnamon buns and had put the mixture of melted butter, brown sugar and syrup that would become the topping for the buns, into a pan.

Before I could roll out the dough and cut the buns to go into the pan, a roach appeared on the counter. It ran right across the topping that had hardened in the pan! I was horrified and wondered how it got there.

[bctt tweet=”Later, my husband found they had made a nest in the refrigerator insulation. They had come with us all the way from Florida to South Dakota!” username=”GaylWright”]

We were finally able to get rid of them once we found their hideout. That is an experience I do not want to repeat in my life.

Does my story bring to mind any memories from your life? I’d love to hear your stories.

Come back next week for Part 2. You’ll hear about a blizzard, a power outage and our first Christmas far away from our parents. You can find previous posts in this series HERE.