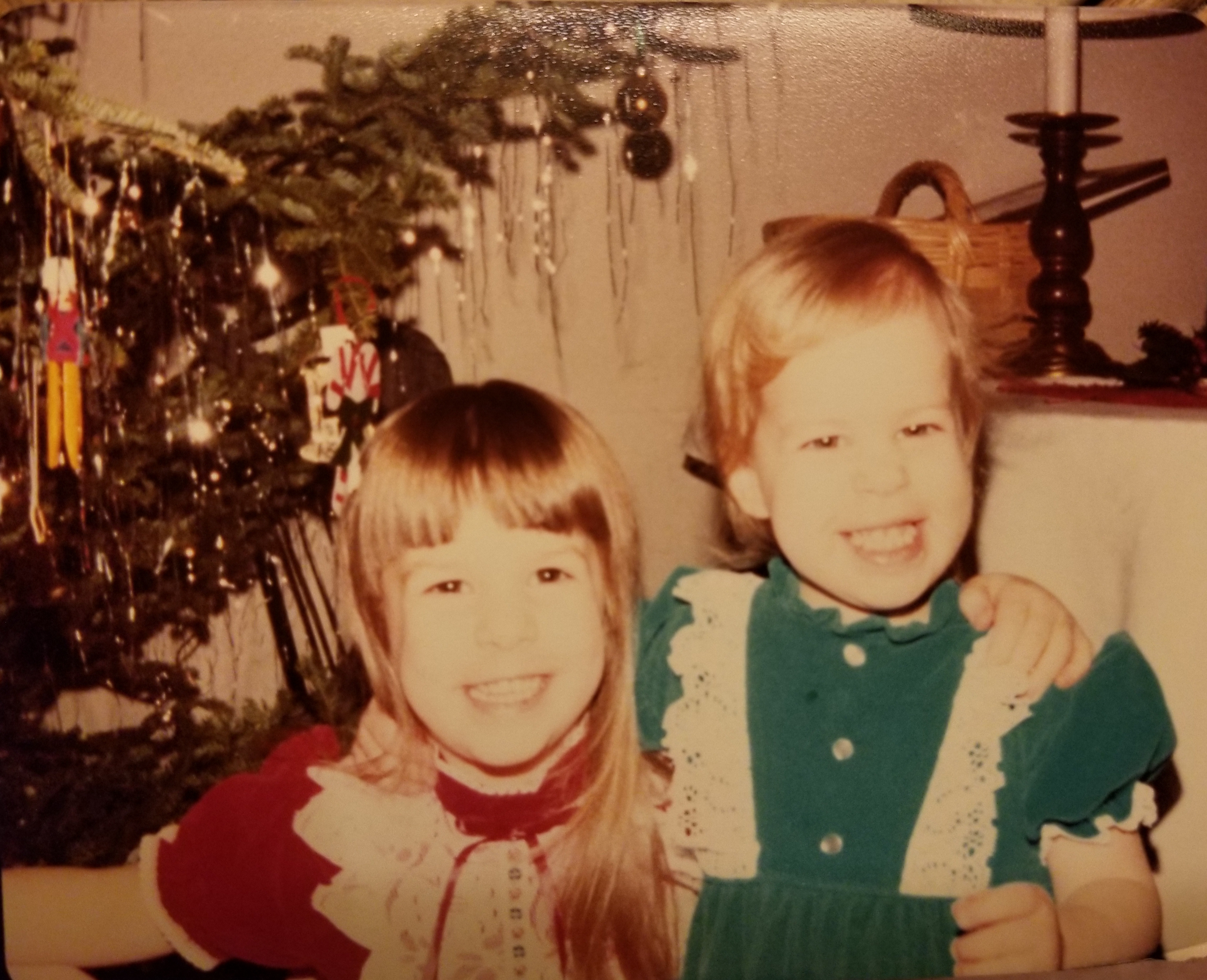 When my husband accepted a teaching job at Covenant Christian School in Cranford, New Jersey, we had no idea of all the new things we would encounter or the full range of emotions we would feel. Last week I told a little bit about our move to the rental home in Kenilworth. The next few weeks for Tell a Memory Tuesday, I’ll share a few of the varied experiences we had during that first year.

We visited the church where Sara went to preschool. It was convenient as we could walk there, and the girls enjoyed the Sunday School. One day after church Jamie came to me with a piece of paper and a pencil. Though she was only 2, she had quite a vocabulary. 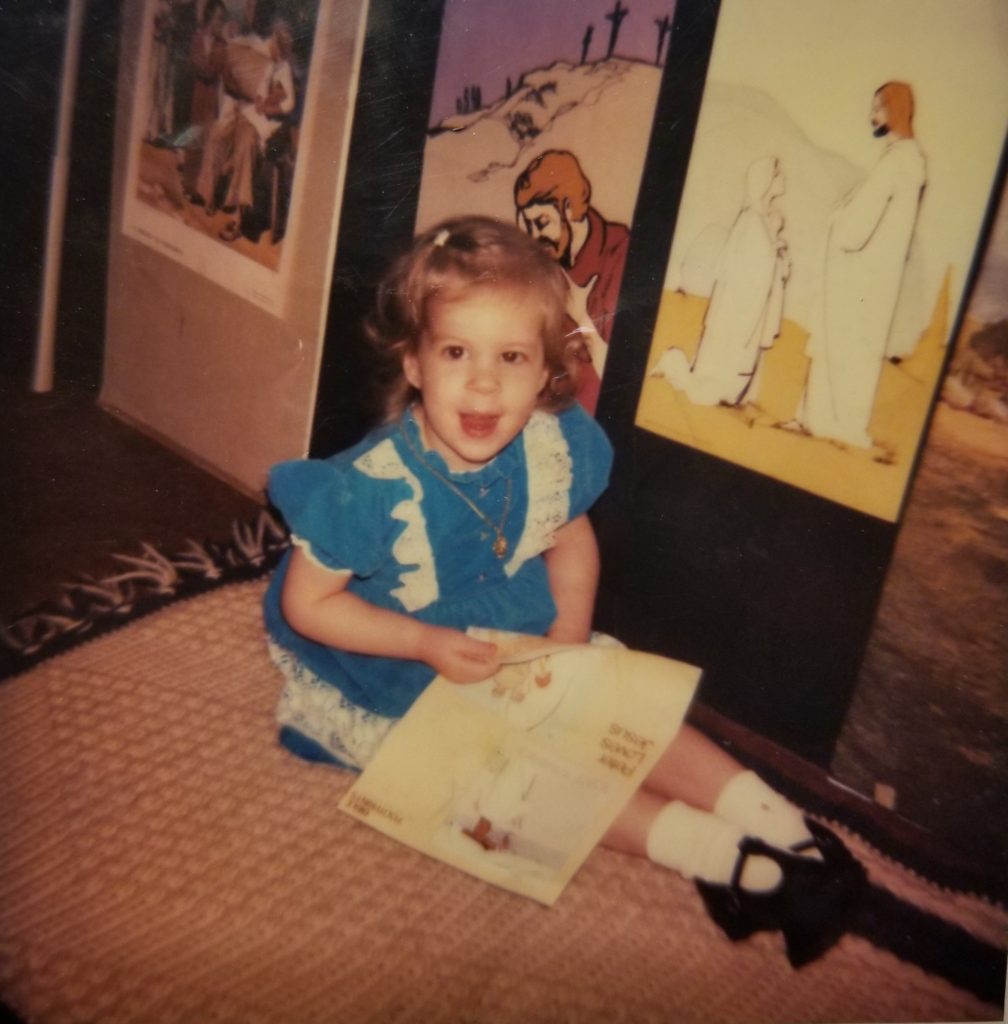 Placing her hand on the paper Jamie said in her high voice, “Can you draw my hand be still? Be still. Be still.” Her teacher must have told her to be still a lot, because Jamie seemed to think it went along with the request to trace around her hand.

Thanksgiving at our home in Kenilworth was a simple meal with just the four of us. Sara reminded me that we did go out later that evening to spend time with another family. She also reminded me that after we closed the door, Jamie said,

“We’ll be back after these messages.”

When I recently mentioned it to Jamie, she said she remembers saying that a lot. I’m sure she got it from watching television. When a show would break for commercials, that was the announcement we heard.

Christmas came and we had a simple but special dinner. The girls loved their Christmas dresses which were gifts from their grandparents. 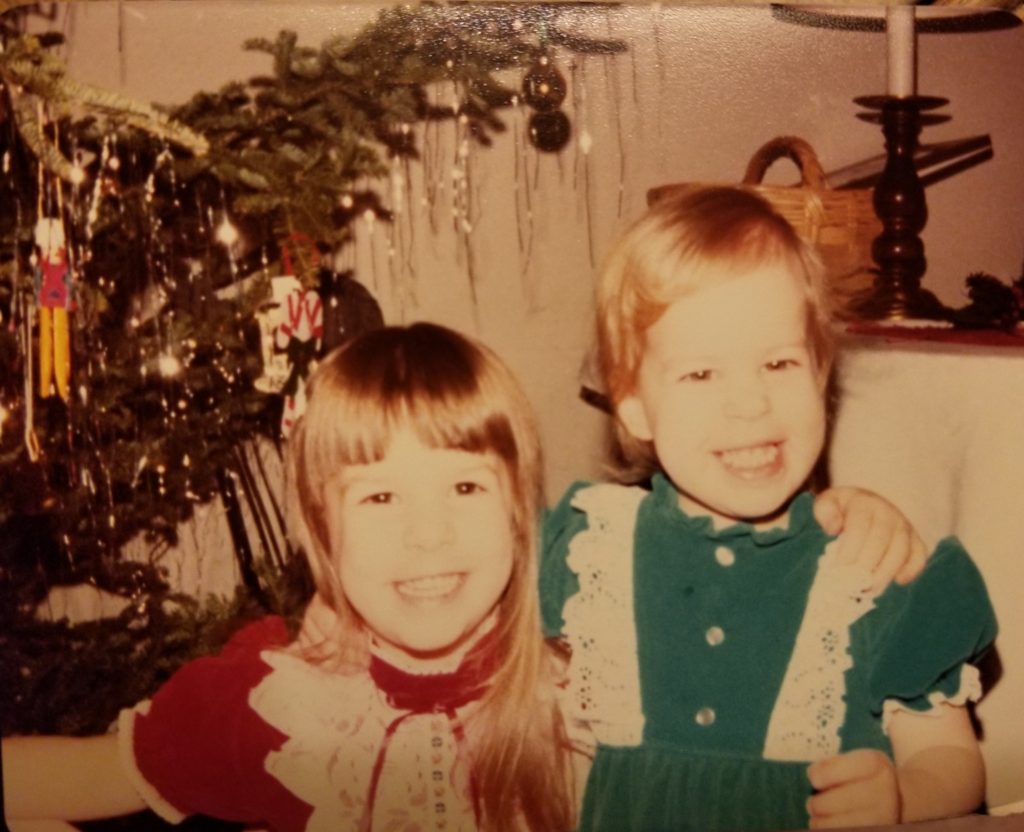 I had some red material that was soft and velvet-like, so I used it to make matching stockings for Sara and Jamie. I wrote their names on them using glue and gold glitter. The girls continued using them for several years after that. 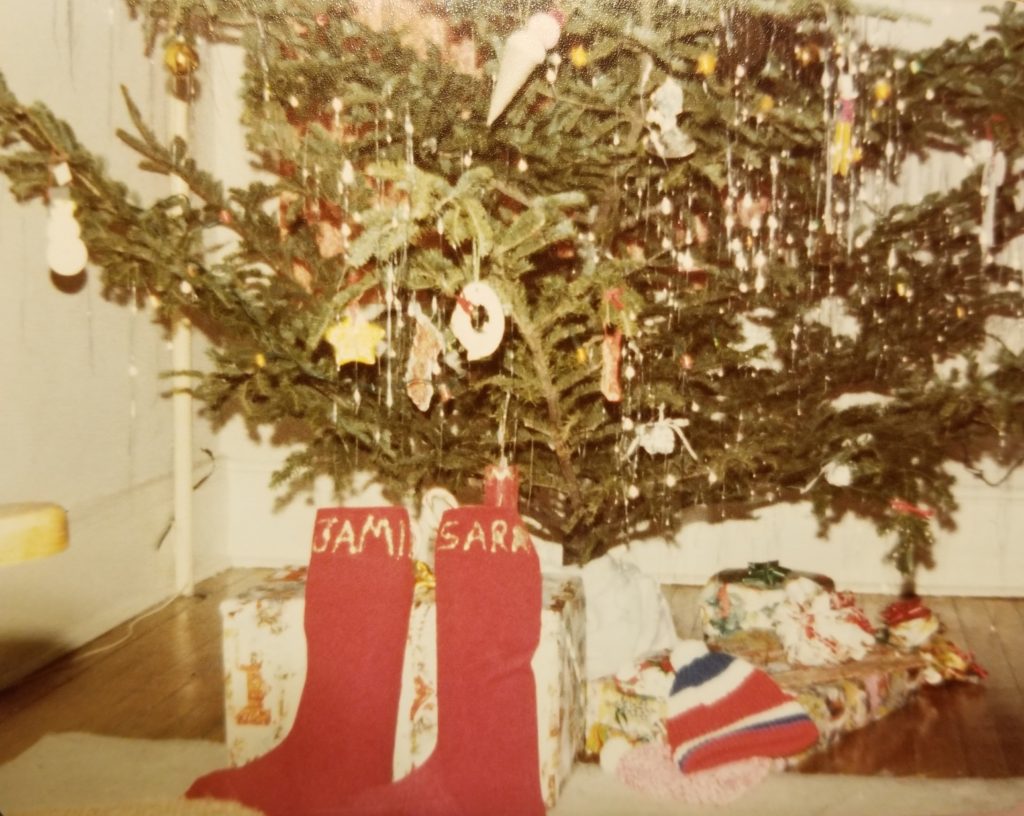 One day nearing Easter, Sara’s class spent time on a project that included filling a jar with layers of colored sand. The teacher also gave to the students those little yellow marshmallow chicks called Peeps.

Sara was so excited that day that she couldn’t wait to get home and started running. She must have tried to go too fast because she tripped and fell, skinning her knees. The impact caused the jar to break spilling all the sand. The Peeps got squished and some fell out taking on pieces of gravel where they landed.

To a little girl, it was a very hard thing to take. I cared for her knees, and we went back to the school. There they were kind enough to give her another jar of the colored sand, but there were no more Peeps. Sara, being determined, figured out a way to eat the squished ones. We gathered them up and got out the gravel as best we could and she enjoyed at least a few of them.

Here is the story from Sara’s perspective:

I do remember the garden and walking to preschool. Once I ran home with marshmallow peeps and a jar of colored sand I made, because I was too excited to wait.

Then I tripped and broke the colored sand jar and squished the chicks. You fixed my knee and brought me back to the preschool. They helped me make another jar of colored sand.

But there were no more peeps, so we ate the squished ones after we picked out the gravel. It was a very dramatic moment.

People were bringing little children to him in order that he might touch them, but the disciples rebuked them. When Jesus saw it, he was indignant and said to them, “Let the little children come to me. Don’t stop them, because the kingdom of God belongs to such as these.Truly I tell you, whoever does not receive the kingdom of God like a little child will never enter it.” After taking them in his arms, he laid his hands on them and blessed them.

Next week for Tell a Memory Tuesday, I’ll share about the time we cared for two children and their big dog when their parents went out of town for a few days. Then the next week I’ll share about our saddest time thus far.

8 thoughts on “Kenilworth: Our First Year in New Jersey”