Today for Tell a Memory Tuesday, I share about choosing a church and a surprise there, caring for a couple of extra kids and their dog. And, of course, something about our own children. This is installment three of our year in Kenilworth.

Our girls loved to sing together. Here they are in their little pink chairs singing their hearts out before bedtime. They still love to sing. 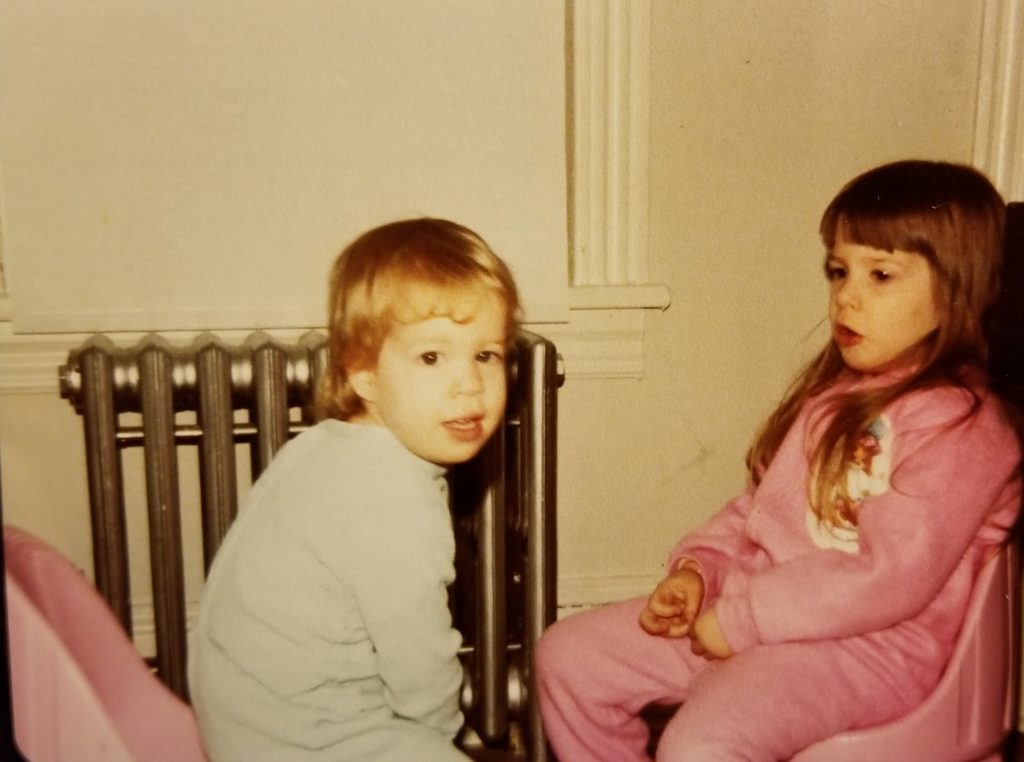 I remember Jamie used to sing herself to sleep at night. We could hear her singing, “Ma-mee-mee” three notes up the scale. Then “Da-dee-dee” three notes down the scale, over and over. 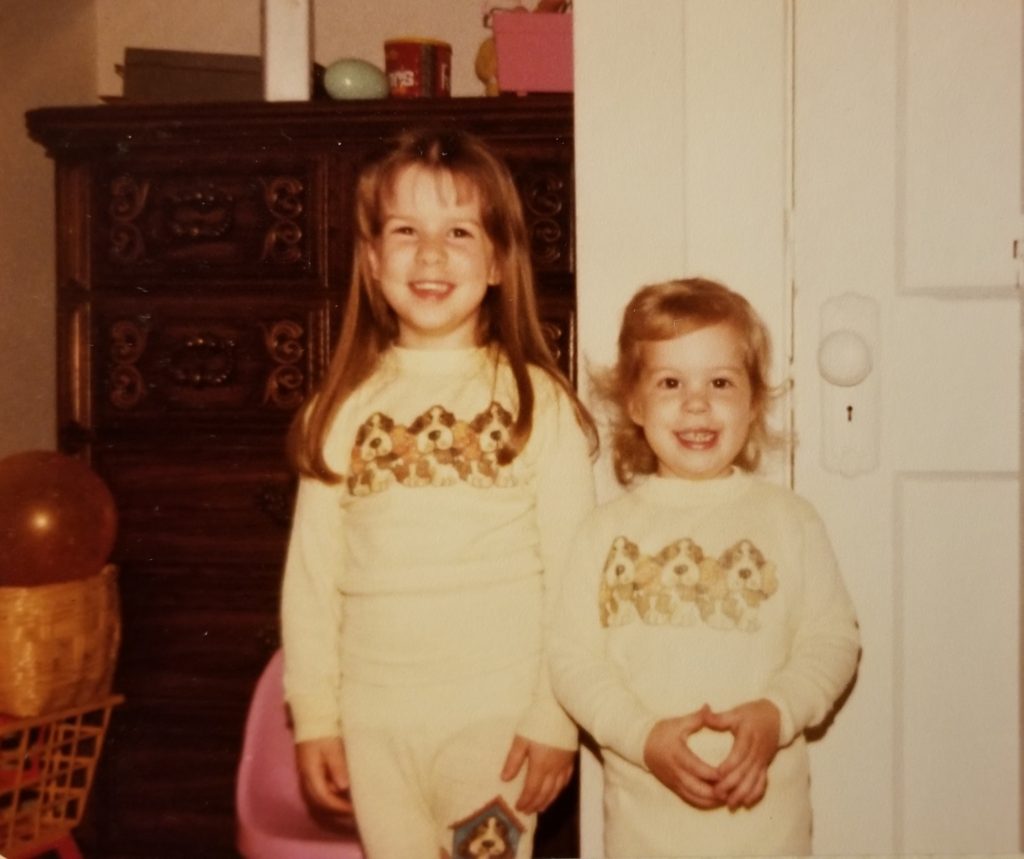 One time I asked her to sing so she started out, “Jesus loves me this I know……” Then abruptly stopped and said, “No, I don’t wanna sing.” So off she went to play.

Finding a New Church and a Surprise

We began attending a new church plant pastored by a man named Bill Iverson. It was a surprise to learn that the famed opera singer, Jerome Hines, also attended the church. I had read his autobiography so it was a treat to meet him and his wife.

What a surprise to find out that we had actually met Rev. Iverson when we lived in New Hampshire! He had come to officiate at the wedding of a friend who used to babysit for us. The wedding took place in the pretty white church on the village green in Amherst. It was only later while talking to him in NJ that we realized we had met before.

The church met in a municipal building for awhile with a nice playground for the kids. Later we rented a church building. There was no piano so I learned to play a little on the organ. That enabled me to take turns accompanying the singing of hymns.

Many of the teachers in the Christian school where my husband taught were members of this church. We also met together weekly in a Bible study, taking turns meeting in each of our homes. It was a good way to get to know one other. Our children were pretty close to the same ages and enjoyed playing together. We would often share meals and birthday celebrations. 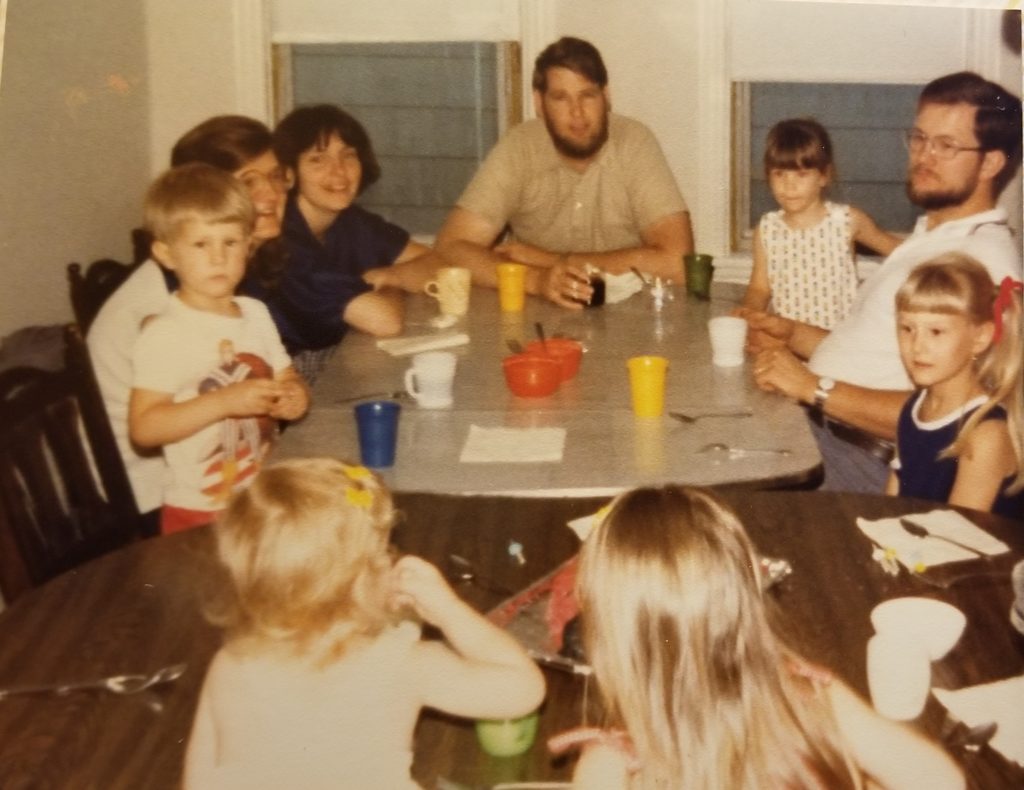 When one of the couples, Jack and Shirley Kraus, had to go out of town for a few days they asked us to take care of their children and dog. Johanna was a little older than Sara, and Ben was between Sara and Jamie. 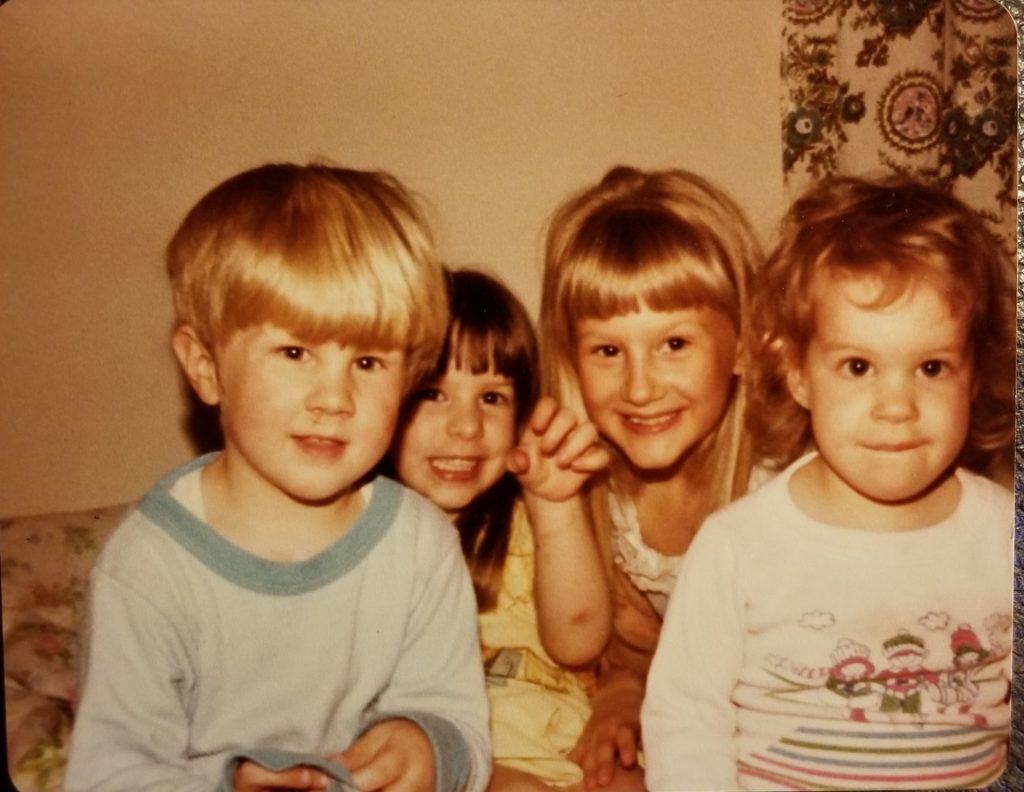 Mandy, their dog, was big with long shaggy hair, a mixed breed, very lovable and full of energy. She looked like the rather large dog in the book, Our Animal Friends at Maple Hill Farm, by Alice and Martin Provensen.

The very first morning, while we were still in bed, we were awakened by a surprise. The children marched into our room, the dog bounding in right along with them. Ben was beating the Fisher Price drum.

[bctt tweet=”Then, rather joyfully and loudly, he said, “This is how we wake up in the morning!” It was quite an interesting way to be awakened.” username=”GaylWright”]

Taking care of two extras was a good experience for me, because it gave me an idea of what it would be like to have more children. Johanna came to me needing a button sewed on some item, and it made me feel good to be able to fix it for her. Ben was full of energy and was a delight to have around.

[bctt tweet=”I had always loved children and knew I wanted to have a big family.  Little did I know I would eventually have seven of my own!” username=”GaylWright”]

Behold, children are a gift of the Lord,
The fruit of the womb is a reward.

**Next week I will share about some fun times and also the hardest trial we had yet to face as a young family. (You may want to skip it if you are sensitive to the topic of miscarriage.)

I’m linking up with: #TellHisStory, #TeaAndWord