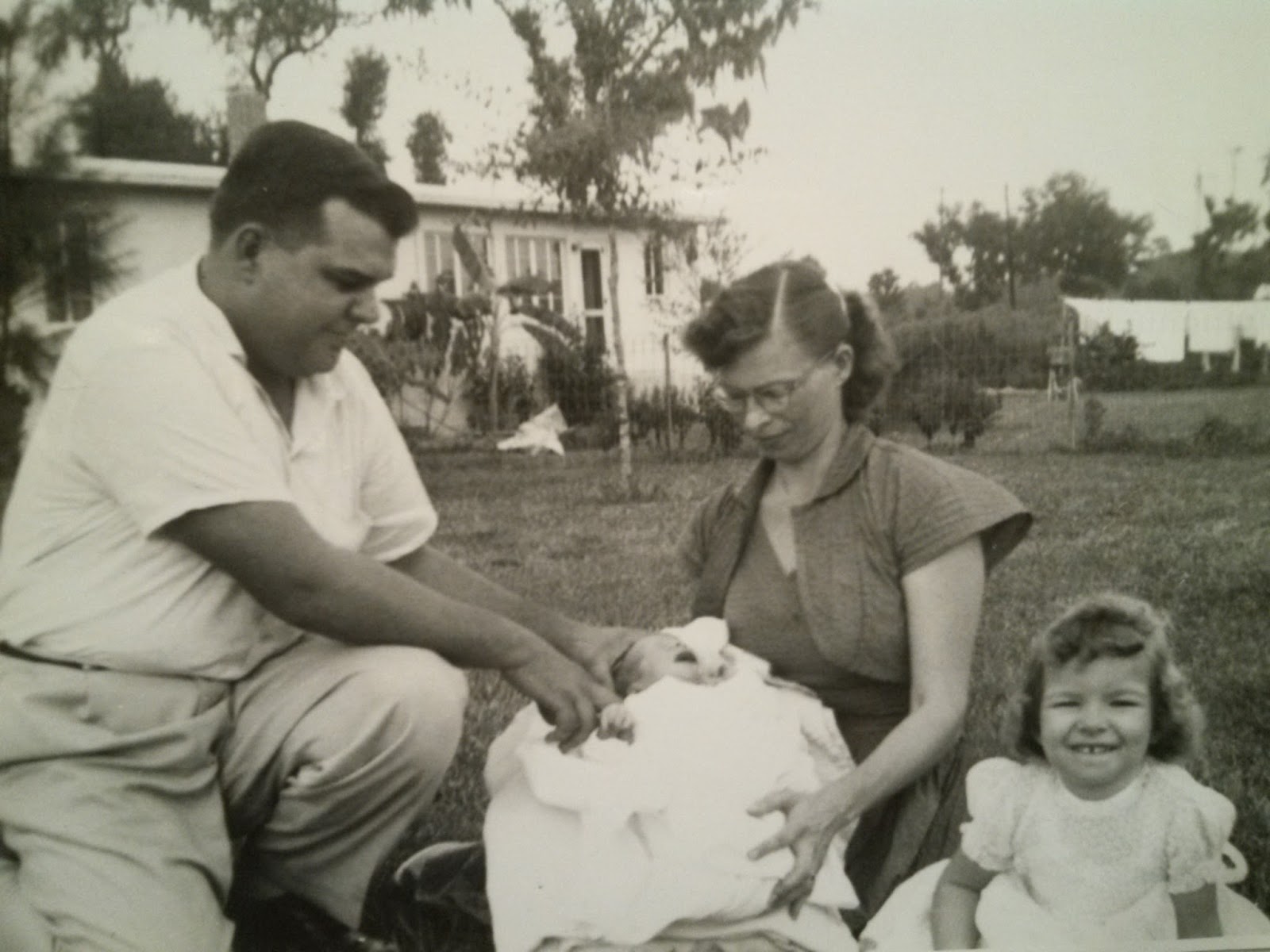 This week for Tell a Memory Tuesday, I want to share a post taken from my previous blog. I usually read Psalm 139 most every morning. It reminds me that I am not only made by God, but He holds me in His hands. When I read it this morning I thought of my father and the touch of his hand.

I was blessed with an earthly father who loved me. That made it easier to think of God as a Father.

This post is in memory of my father, who died before his 66th birthday. But it is also about my heavenly Father, who loves and cares for me.

You have encircled me; you have placed your hand on me.

If I go up to heaven, you are there; if I make my bed in Sheol, you are there.
If I live at the eastern horizon or settle at the western limits, even there your hand will lead me; your right hand will hold on to me.

My dad was around 6 ft. tall, not really a giant, but to a child, his size could be intimidating. My friends were sometimes a little afraid of him, which I could never understand. To me he was just Daddy, the man who loved me and took care of me. My friends soon learned there was nothing to be afraid of, because he was so kind and welcoming to them. 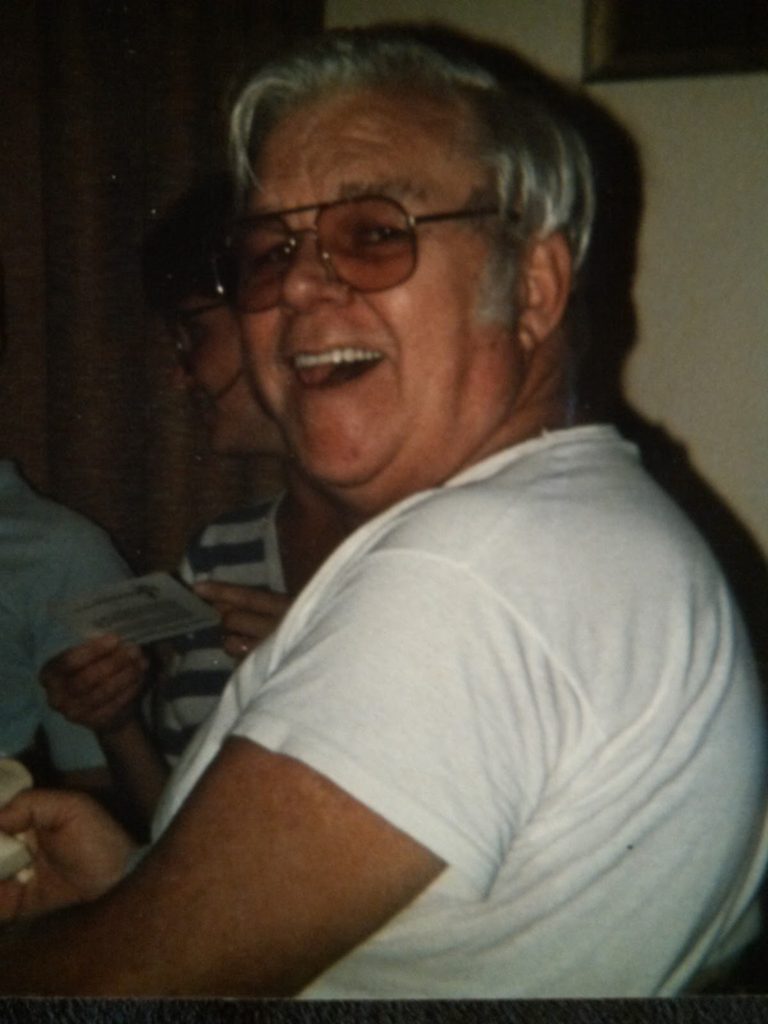 I remember his hands were large. [bctt tweet=”He wanted me to show him how to play the piano, but his fingers were so large that he couldn’t seem to play just one key. His finger would automatically get two at a time.” username=”GaylWright”]

He did love to hear me play and wanted me to be a concert pianist, but that was not my desire. I played for fun, for inspiration and for worship.

One day when I was about 3 years old my dad and I were walking hand in hand. He saw that I was having to run to keep up with his big strides, so he put his hands around my waist, lifted me up, and carried me along. It felt almost like I was floating through the air.

Through the years we did not always see eye to eye, but I never doubted his love.

I enjoyed being in his presence and always wanted to go with him when he went to the store. On one occasion I was sitting in the front seat with him when he reached over, patted my knee with his big hand and said, “I’ve got a pretty daughter.”

That meant the world to me, and I will never forget it.

Always before bed both parents would hug and kiss me and let me know they loved me. This continued even when I was grown and had kids of my own. Whenever we would visit, we would share the nightly hugs and kisses, and my kids also were included.

Often during the day, when he passed by where I was sitting or standing, my dad would put his heavy hand on my head or on my shoulder.

It was one of his ways of telling me he that he saw me and loved me. My girls remember him doing it to them sometimes, too. He loved his grandchildren dearly.

One morning while still in bed I got a call from my brother telling me Daddy was in the hospital. They didn’t really know what the problem was. Two weeks later I, along with my 15 month old son, boarded a plane. I hoped we would make it to Florida before it was too late.

The airlines delayed our flight for five hours, two of which were after we had boarded the plane. When we finally arrived, my brother picked us up at the airport.  A friend was babysitting my brother’s kids, so we dropped my son off there. Then we went on to the hospital. It was after visiting hours, but they were kind enough to ignore the rules for us.

When I went in to see my dad, he opened his eyes and smiled.

He reached up his hand and ran his fingers through my hair, and I think I must have grabbed and held his hand. My dad’s touch always meant so much to me.

Holding His Hand One Last Time

After that night I never saw him smile again or open his eyes, but the medical team assured us that he still heard our voices. My brother read to him a sweet letter my oldest daughter had written to her grandfather. I knew that I would not be able to keep from crying if I tried to read it aloud.

The last time I held my father’s hand was just before they took him for one last surgery. I remember he was squeezing my hand tightly. I wondered later if he was trying to tell me that he did not want to go through with the surgery. It was as if he knew that it would be pointless. He never did regain consciousness.

It has been over 27 years since I lost my father. I no longer have the touch of his hands, but my heavenly Father is always with me.] I feel His touch through people He has put into my life and through His provision of my needs. As I read His word, pray and trust, He gives me peace. One day I will see my father again, because he is with our Father in heaven.

We do not want you to be uninformed, brothers and sisters, concerning those who are asleep, so that you will not grieve like the rest, who have no hope.

For the Lord himself will descend from heaven with a shout, with the archangel’s voice, and with the trumpet of God, and the dead in Christ will rise first.

Then we who are still alive, who are left, will be caught up together with them in the clouds to meet the Lord in the air, and so we will always be with the Lord. Therefore encourage one another with these words.

What about you? Do you have any memories to share of fathers or other people that meant a lot to you who are no longer here?

14 thoughts on “Hands: A Father’s Protection and Love”