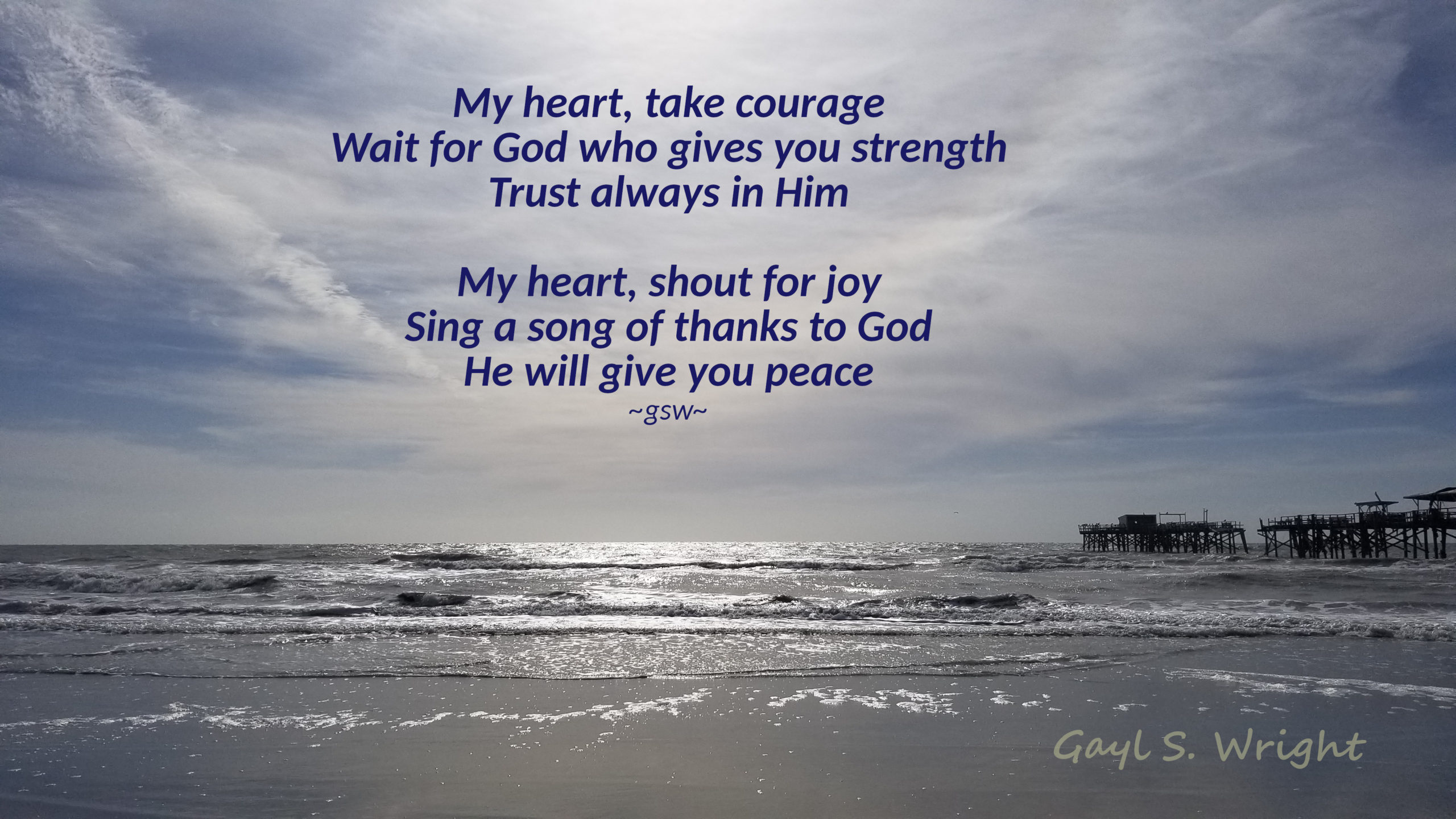 Lately I have been enjoying crocheting hats. I have lots of yarn to choose from since I inherited my mom’s stash. My friend and owner of Rows and Roses, Sati Glenn, had written a new pattern. I was one of the first to test the pattern and here is my first hat. 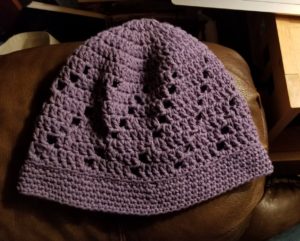 I liked the pattern so much I had to make more. So I made another purple one but added a flower of the same color on the side. I thought it gave it a nice polished finish. 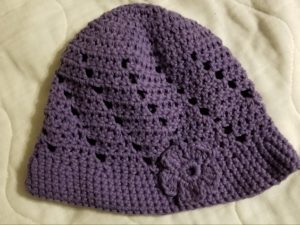 Then I got the idea of making one for my 3 year old granddaughter. Her mother told me she really liked Spiderman and Shazam. So we decided to use the colors red and blue. I made the hat red and put a design of three blue flowers on the side. 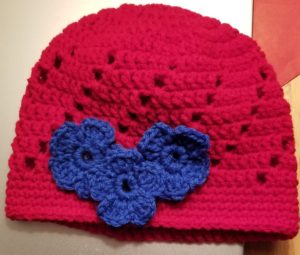 I was having so much fun I wanted to make more. So I thought of another granddaughter who is nine years old. She likes bright and pretty things, so I decided to make a yellow hat.

You would think after already making three hats this one would be a cinch. Wrong!

I must have been distracted with the movie we watched while I crocheted. As I progressed I knew something was wrong, because it wasn’t looking like the others. Instead, it looked like just a big yellow circle, but I kept crocheting anyway, round after round.

Finally, after about 2/3 of the way through the pattern, I knew I must stop. There must be too many stitches, but I couldn’t imagine how I could mess it up so much. But, still, something was wrong.

As I counted back round after round I found my mistake all the way back on the 4th round. Somehow I had added about ten extra stitches!

I just couldn’t believe I would make such a huge mistake on something so easy. But there it was right before me. So, I pulled out round after round, not paying any attention to where the yarn was going. Finally, back at the 4th round I began again. It was a pain to have to practically start over, but I was happy and ready to get back to work.

A Tangled Mess of Yarn

Things were going well as I was paying attention this time. Then, it happened. I saw a tangle in the yarn, so I had to stop and get it out, not just once but several times. Finally I could go no farther, even though I only had about 3 rounds left to finished the hat.

The rest of the yarn was in the worst tangle I had ever seen. I wish I had a picture to show you. It was a mess – attached to the cone on one end, the unfinished hat on the other end and what seemed like another tangle leading out from the middle.

I tried so hard to untangle it, but the more I tried, the worse it got and the more frustrated I became. After at least an hour, probably more, I was ready to give up.

So I decided to stop and not worry about it. I was tired and knew I would just get more frustrated if I continued. The hat would have to wait.

The next day I felt rested and refreshed, so I decided to try again. I was more patient this time. Grabbing the cone holding the rest of the yarn, I tried to follow the line of yarn from it. I gently pulled apart the knots, sometimes having to twist the cone, sometimes sending it back through openings in the tangle.

Finally, after gently working with it for probably half an hour or more, it all fell into place. Next time I have to take out a lot I will make sure to wind it up right away so there won’t be any tangles.

What a relief I felt as I took the hook in my hand and finished crocheting the hat!  To make a longer story short, I decided to put flowers all around the bottom of the hat. Since my granddaughter’s favorite colors are turquoise and pink, I alternated those colors on the bottom of the hat. 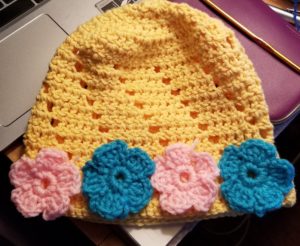 I’m sure there is a lesson somewhere in my tangled yarn story with my striving so hard but seemingly getting nowhere.

I did learn that I must be more careful when I take stitches out. And if there is a big tangle I should not to try to remove it when I am tired. A good night’s sleep can work wonders.

Life is like that sometimes. When I strive so hard and push myself but seem to make no progress in a particular area, maybe I should step back a bit. Taking time to refocus and refresh myself enables me to tackle the problem without so much striving. Sometimes I need to put it aside and wait for a better time.

With my writing and art I know that timing makes a difference. When I push just to get it finished, I lose the joy of creating.

But when I wait on the Lord, trusting in His timing, I am much more at peace with myself and my work. I want to share the following scriptures from my reading this morning. Then, a poem I wrote in response to it.

The Lord is my strength and my shield;
my heart trusts in him, and I am helped.
Therefore my heart celebrates,
and I give thanks to him with my song. 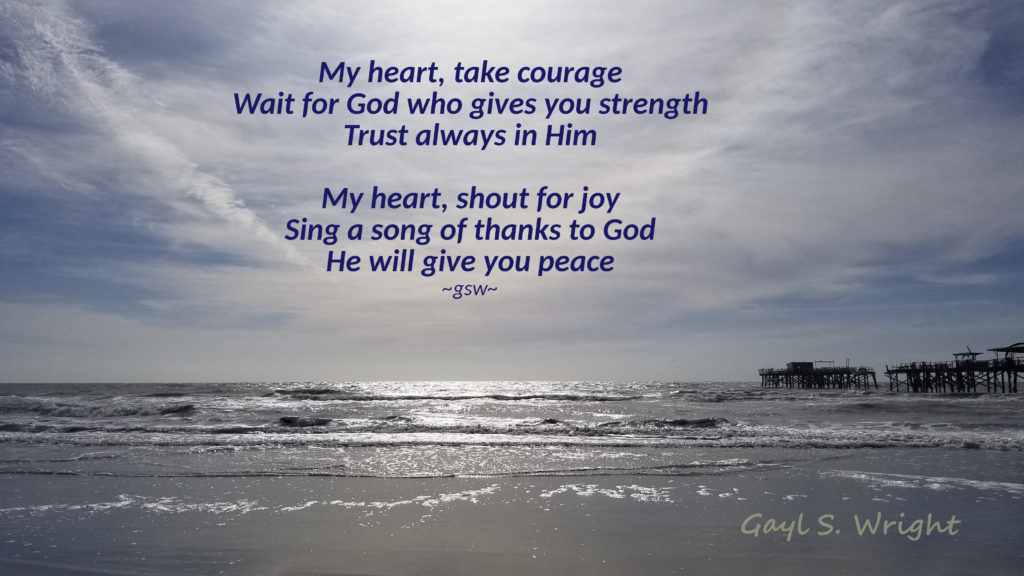 I’m linking up with: #InspireMeMonday, #LMMLinkup