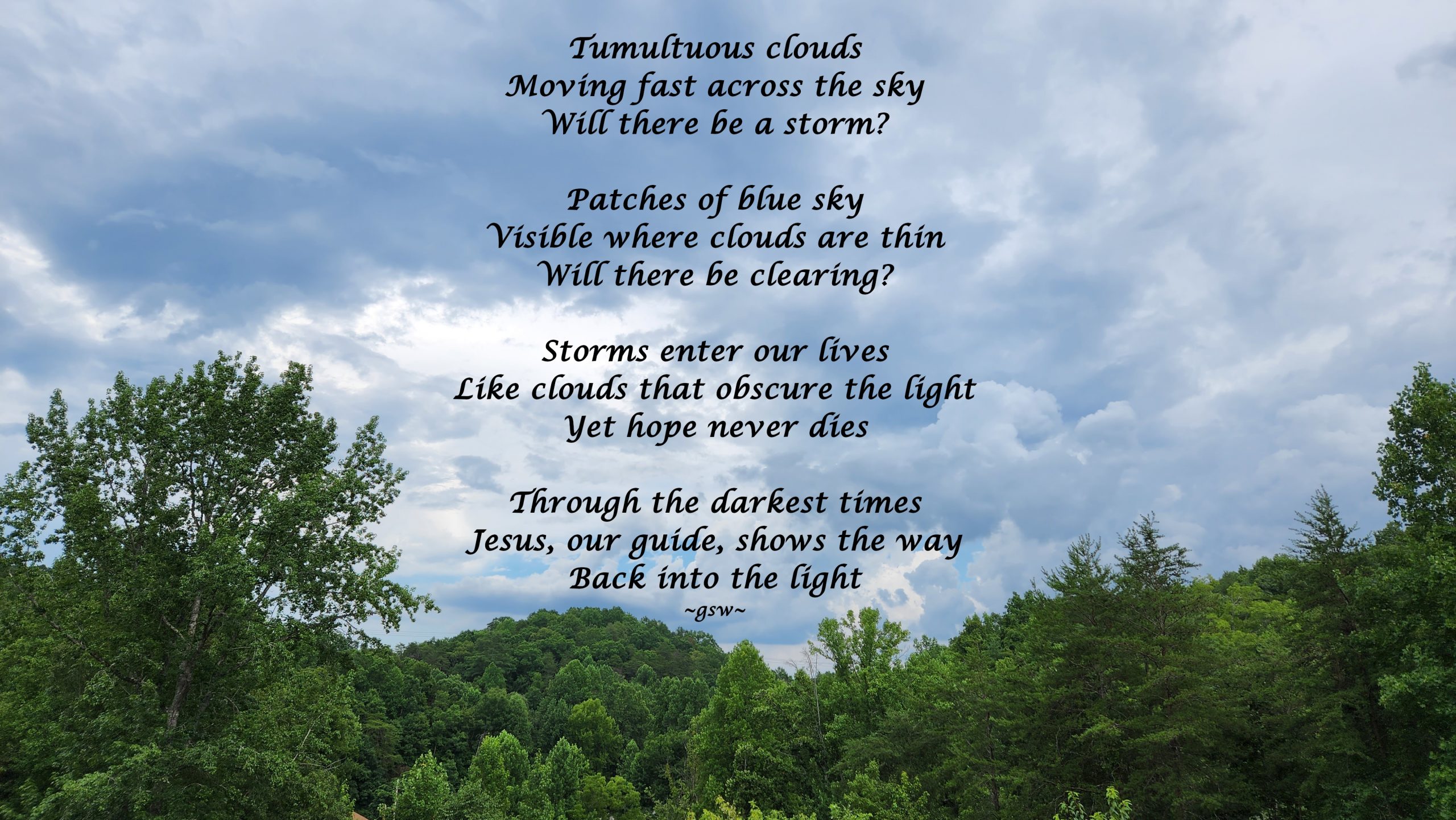 Tumultuous clouds
Moving fast across the sky
Will there be a storm?

Patches of blue sky
Visible where clouds are thin
Will there be clearing?

Through the darkest times
Jesus, our guide, shows the way
Back into the light

There were certainly tumultuous clouds that day when Jesus and his disciples got into a boat to cross the lake. Jesus must have been pretty tired, because he was sleeping. The winds blew stronger and harder and the waves rose to a scary height. Those disciples feared for their lives and wondered how Jesus could sleep during such a wild storm. They had forgotten that He was the Lord, who made the heavens and the earth. Let’s read the rest of the story as Luke described it:

They came and woke him up, saying, “Master, Master, we’re going to die!”

Then he got up and rebuked the wind and the raging waves. So they ceased, and there was a calm. He said to them, “Where is your faith?”

They were fearful and amazed, asking one another, “Who then is this? He commands even the winds and the waves, and they obey him!”

Our Lord is more powerful than any other and is able to rescue from the worst situations. David often called upon God to rescue him and then offered his praise and thanksgiving.

I love you, Lord, my strength.
The Lord is my rock,
my fortress, and my deliverer,
my God, my rock where I seek refuge,
my shield and the horn of my salvation,
my stronghold.
I called to the Lord, who is worthy of praise,
and I was saved from my enemies.

Continuing in Psalm 18, David uses imagery of storm clouds, earthquake and more to describe how God rescued him from his enemies, including Saul.

The ropes of death were wrapped around me;
the torrents of destruction terrified me.
The ropes of Sheol entangled me;
the snares of death confronted me.
I called to the Lord in my distress,
and I cried to my God for help.
From his temple he heard my voice,
and my cry to him reached his ears.

Then the earth shook and quaked;
the foundations of the mountains trembled;
they shook because he burned with anger.
Smoke rose from his nostrils,
and consuming fire came from his mouth;
coals were set ablaze by it.
He bent the heavens and came down,
total darkness beneath his feet.
He rode on a cherub and flew,
soaring on the wings of the wind.
He made darkness his hiding place,
dark storm clouds his canopy around him.
From the radiance of his presence,
his clouds swept onward with hail and blazing coals.
The Lord thundered from heaven;
the Most High made his voice heard.
He shot his arrows and scattered them;
he hurled lightning bolts and routed them.
The depths of the sea became visible,
the foundations of the world were exposed,
at your rebuke, Lord,
at the blast of the breath of your nostrils.

He reached down from on high
and took hold of me;
he pulled me out of deep water.
He rescued me from my powerful enemy
and from those who hated me,
for they were too strong for me.
They confronted me in the day of my calamity,
but the Lord was my support.
He brought me out to a spacious place;
he rescued me because he delighted in me.

Sometimes, God doesn’t rescue us out of our tumultuous clouds and storms. Instead, He strengthens us and goes with us through them. We may struggle deeply with illness, loss, spoiled relationships, chaotic circumstances and more, but not without hope.

One day our struggles here will end and our sure hope will become a reality.

When he has swallowed up death once and for all,
the Lord God will wipe away the tears
from every face
and remove his people’s disgrace
from the whole earth,
for the Lord has spoken.

IN GOD WE PUT OUR HOPE

Whatever we are going through, there is always hope. In countless dark times in my life, I have never given up hope. God has provided comfort and strength through His Word and friends and through creative activity. When we share our stories with others, it helps them see they are not alone and may just lift their spirits.

As I was writing this post I was texting with my dear friend, Bettie Gilbert. She has a book that belonged to her grandmother. In it she found a folded up letter written by her great aunt over 70 years ago. The letter contains a poem that likens pain and suffering to storms. The poem suggests that if we can learn something from our pain, listen for God’s voice above the storm, then maybe we can empathize with others who are suffering. Maybe we can share the comfort we receive from God and bring light and hope to someone else.

What are your thoughts?

Enjoy this beautiful reminder of Hope by Michael Card!

16 thoughts on “Tumultuous Clouds Darken, but Hope is Never Defeated”